A couple of friends and I have been planning a brew day, and we’ve been looking forward to it for months. It was tough to wait this long between brew sessions, but it was well worth it.

In building the recipe, we decided to be ambitious and attempt a clone of pFriem’s Dark Strong Ale. As far as I’m concerned, there’s no style superior to the Belgian Dark Strong. Jeff found pFriem’s ingredient list, but neither of us could find any posts about an attempted clone. A little tinkering with BrewTarget yielded a first draft recipe. While the style demands little hops, Adam nudged the hop additions a little higher than what BrewTarget initially suggested would put our bitterness in range for the style. Fine by me! Finally, a great Belgian style deserves a great Belgian yeast, so we went with Wyeast 3787, their Westmalle strain. This yeast is not only used by the Westmalle Abbey but the Westvleteren Abbey as well.

As always, the practical substitutions had to be made at the brew store. Here’s the full recipe: 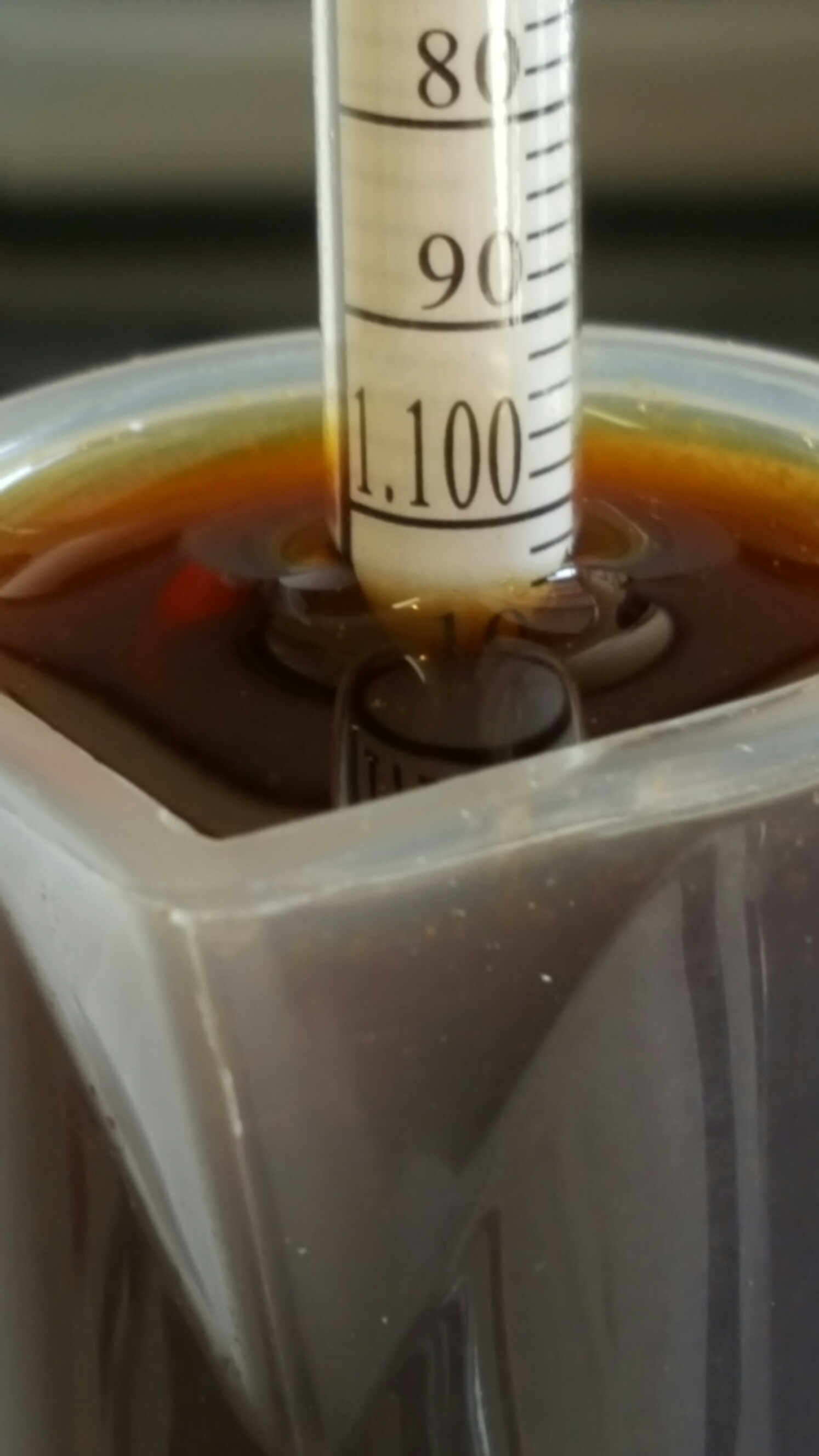 SG to be measured 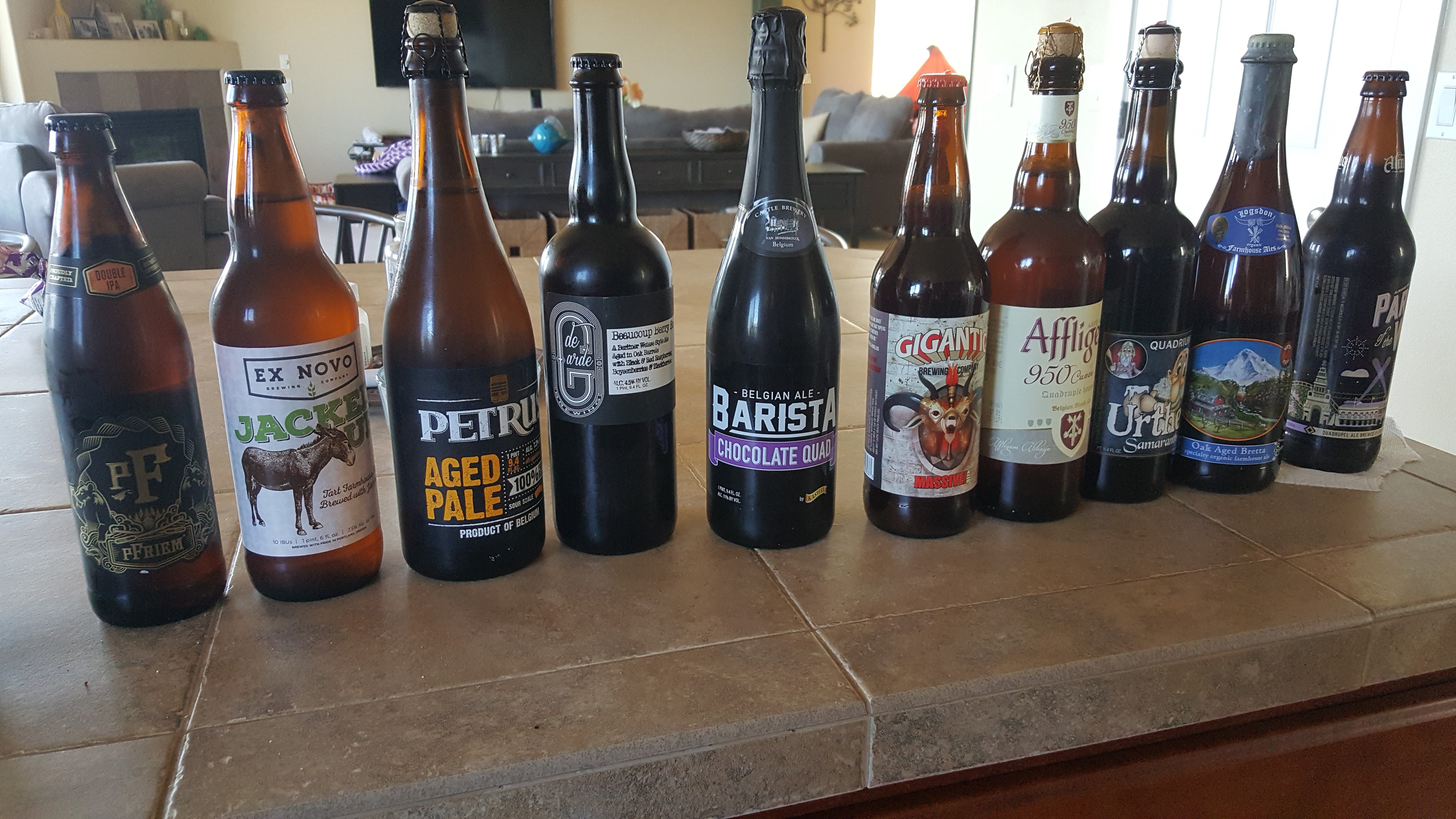 More than anything, the available food and libations stood out this brew day. Between the
three of us, we built quite a menu of beers to quaff, and we nearly finished them all.

Furthermore, not only did Trang’s mom watch My Lan for the day, she made her incredible chicken wings. All grain brew days are long, but we were neither hungry nor sober! 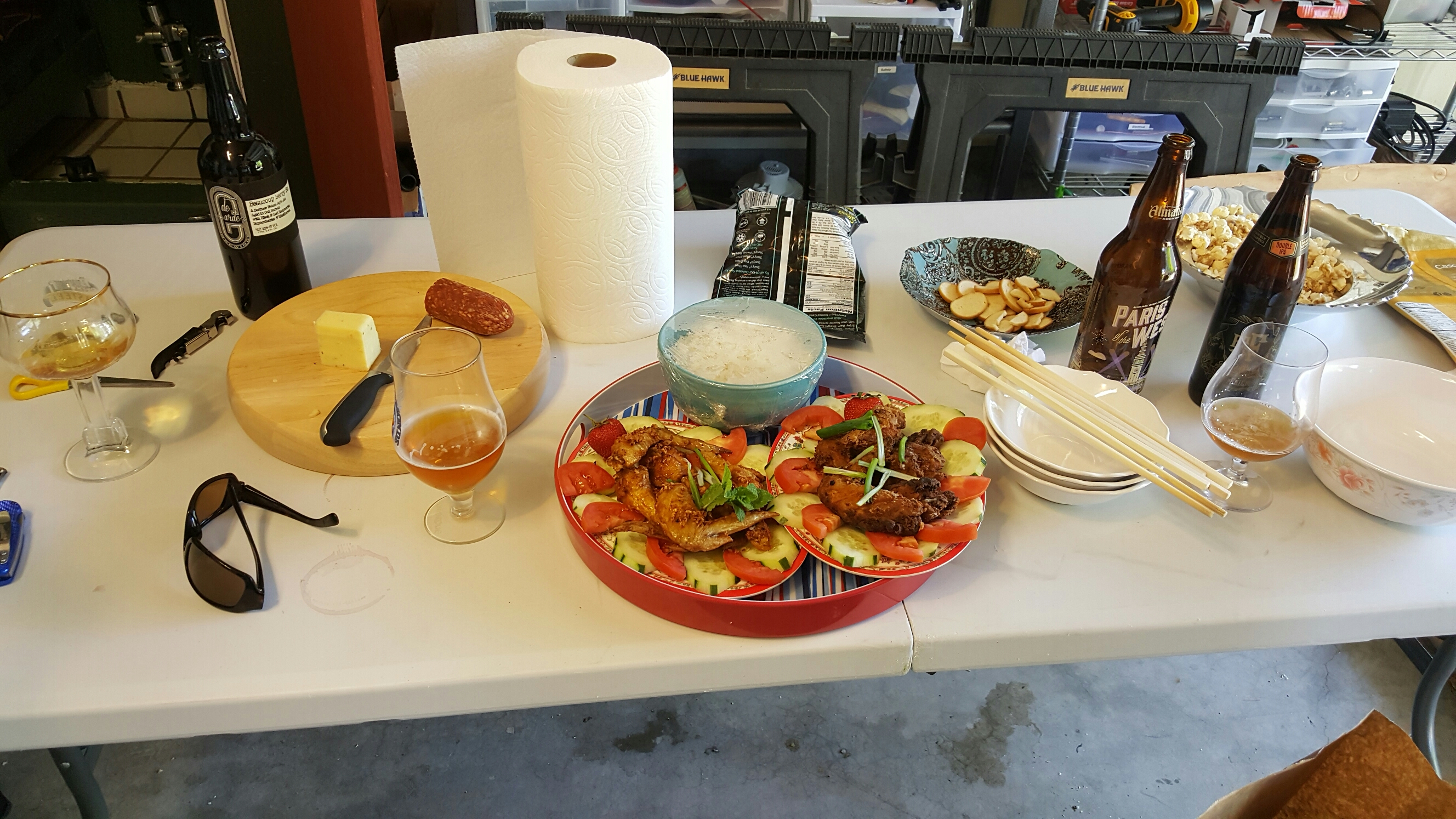 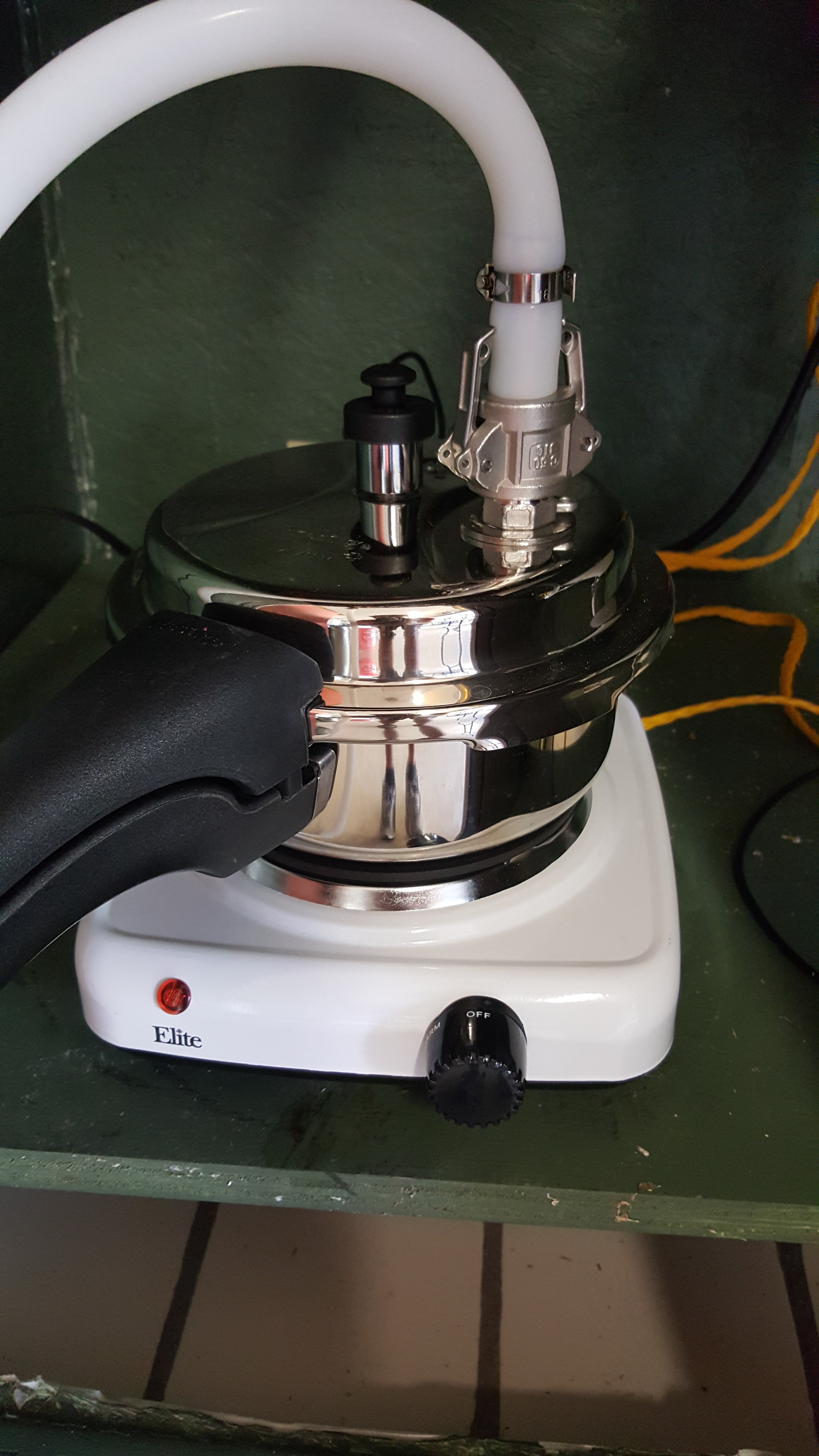 I’ve only made a few small changes since the last brew day. First, I modified a pressure cooker to supply pressurized steam for sanitizing my heat exchanger. I just drilled a hole in the top for a cam lock fitting. When it’s time to sanituze, I put the pressure cooker on a hot plate and attach it to my exchanger. Voila, low pressure steam does the sanitizing for me. I previously had to boil water and pump it through, so this is obviously much faster and doesn’t tie up my brew pump for half an hour. 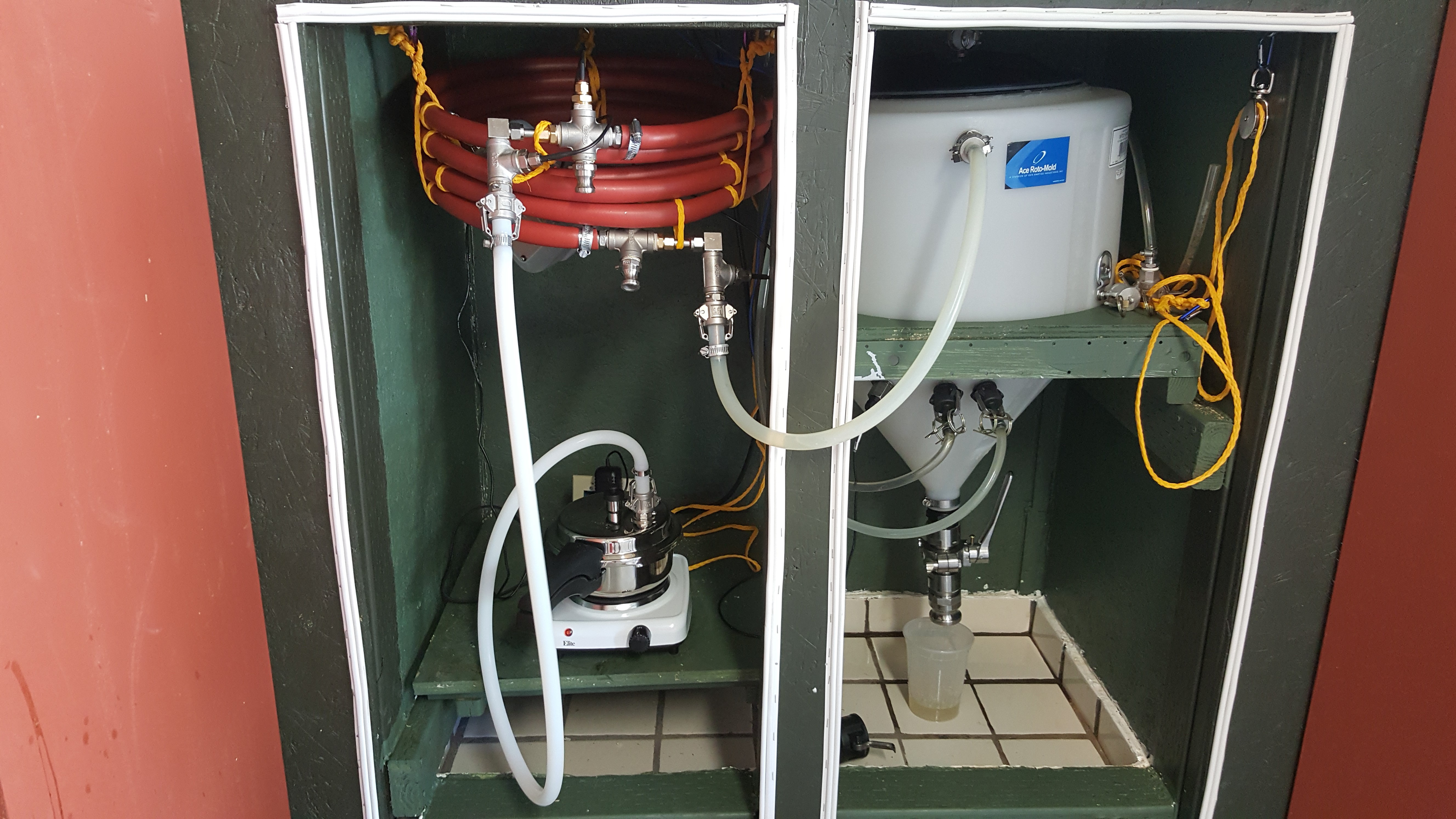 Second, I added a manifold to my rig. This allows me to divert the recirculating wort to the brew kettle as well as direct water from the hot liquor tank to the mash tun without any fumbling around with hoses. The pump inlet piping still needs some work. 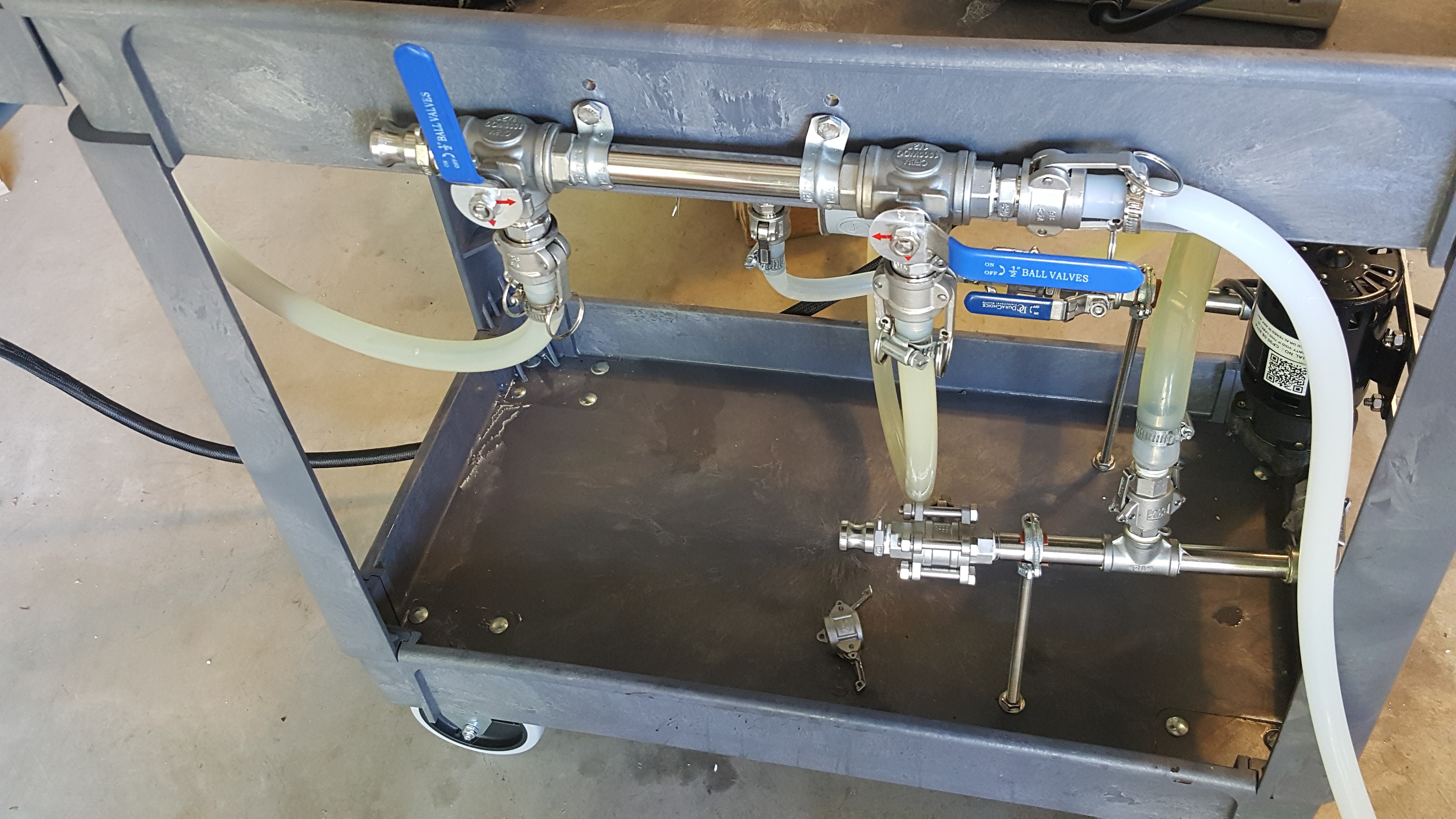 Lastly, I built a stand for my hot liquor tank so it can drain into the mash tun by gravity. We had some trouble with the flow getting hung up at a high point in the flow path, so I’ll have to pay it more thought.

A stand gives the hot liquor tank the potential energy it needs for transfers.

The improvements were small but made it my smoothest all grain brew day yet. Switching to batch sparging has improved but not completely resolved my efficiency woes. My efficiency was about 60%. This is partly because of the style, but there may be other problems. I may be mashing at too high a temperature, so I’ll try a lower mash temperature next time. I’ll also ask for some advice from the folks at my home brew store, Above The Rest. 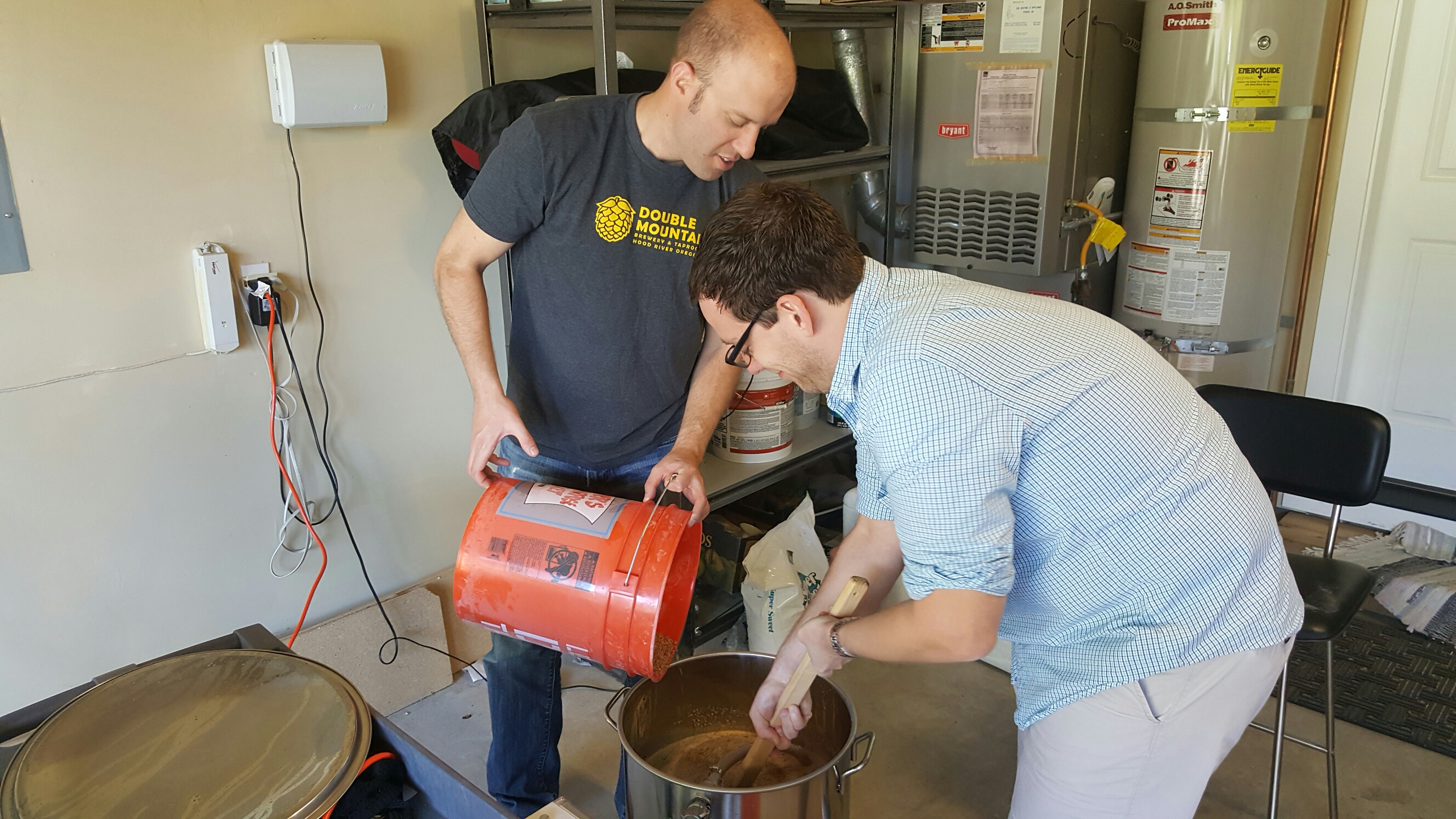 Stir it up, guys.

The homemade candi sugar recipe was a little different. This batch was made of 5 lb candi sugar, 1/2 cup molasses, and pickling lime cooked in a slow cooker for 30 hrs. I’ll back off on the molasses next time, as that was still the dominant flavor when it was done cooking. 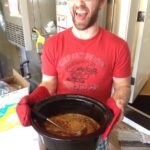 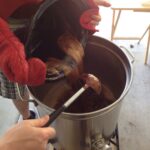 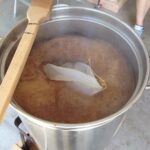 Cooling was a breeze, although we rushed it a bit and pitched a little hotter than intended at 30 degC. The yeast starter was a good size at about 400 mL, but the heat shock set the fermentation back about a day. It’s going strong now. 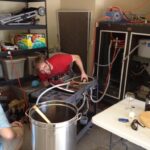 Jeff and I keeping it cool. 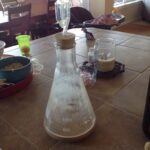 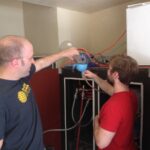 The final batch volume was about 7 gallons, but we will be bottling nearly all of it.

I can’t wait to taste the first Dark Strong and the first beer made with the Westmalle strain to come out of my garage!