Merry Christmas, everyone! I just put My Lan to bed and am waiting for the family to get back from the airport, so I thought I’d provide an update. My study schedule has curtailed my tinkering but hasn’t extinguished it entirely. I’ve been slowly making little changes and cobbling together a RIMS (Recirculation Infusion Mash System). The past four weeks of IR and nights has left me with many hours that were too odd to study but too scattered to sleep, so I managed to wrap much of it up.

Before moving on to the news, I’d like to report that the conical fermenter is working great. I’ve read mixed reviews about the plastic conicals, and getting the conical into the cabinet with a clean-in-place configuration was no small feat. The convenience of 10 gallon batches, precise temperature control, and rapid kegging have proven worth it after only two batches. Watch how quickly I can fill a 5 gallon keg!

I took my seasoned 5400 W Camco heating element and mounted it in a 1.5″ stainless pipe. There’s a 1.5″ cam lock fitting for easy inspection. There’s also a 1/2″ thermowell mounted at the outlet for a 1/4″ temperature probe. The whole unit is mounted on a plastic cart from Harbor Freight, secured with cushioned stainless pipe hangers from eBay and 3/8″ stainless bolts cut to fit and secured to the cart with my Chugger pump and the control box. 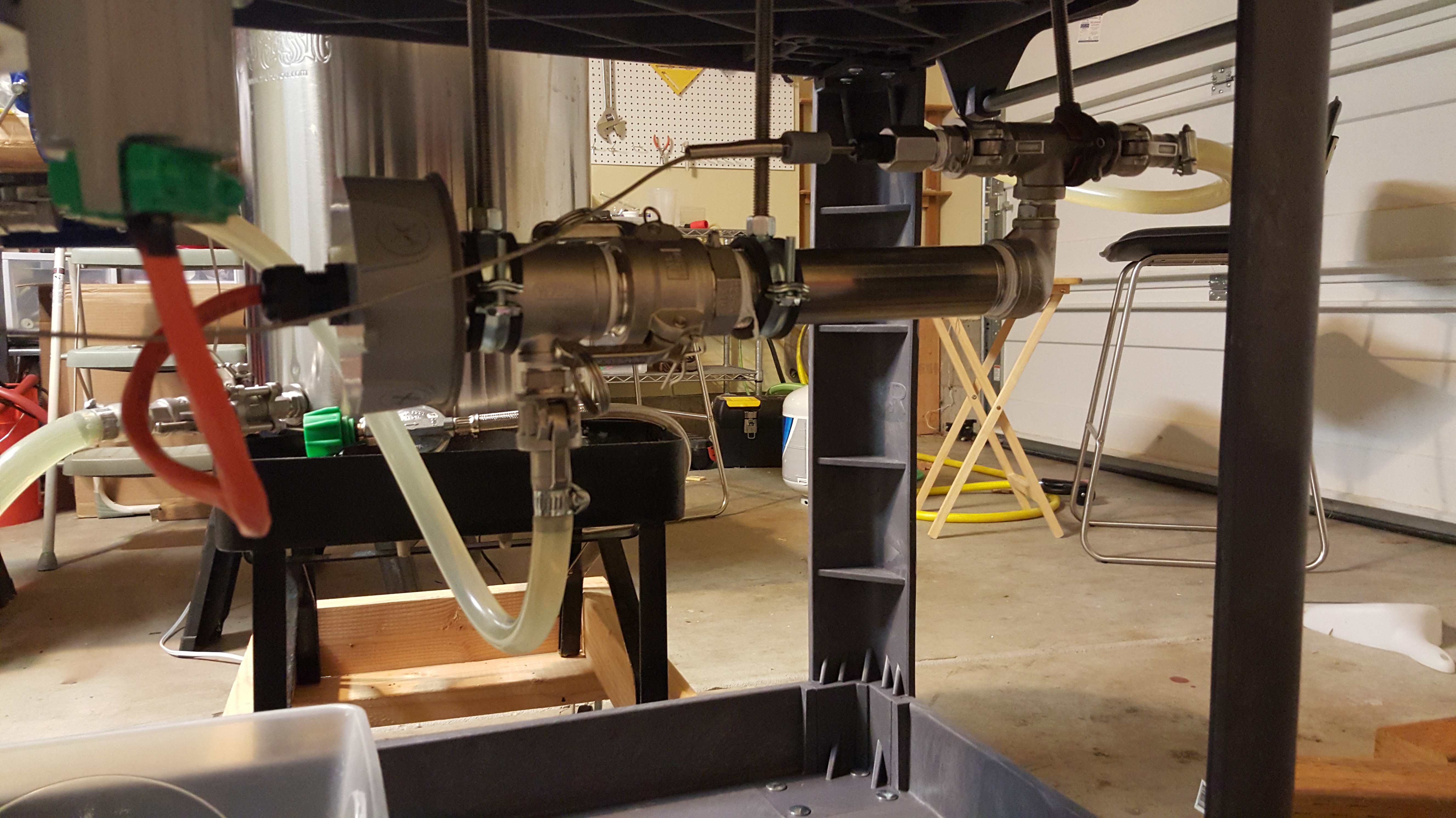 The enclosure has been a difficulty of its own. I underestimated the size of the L6-30 plugs I use for the 240 VAC connections since the circuit has to handle 25 A, so I had to make housings for the plugs only. You can see those monstrosities hanging off the bottom of the enclosure. 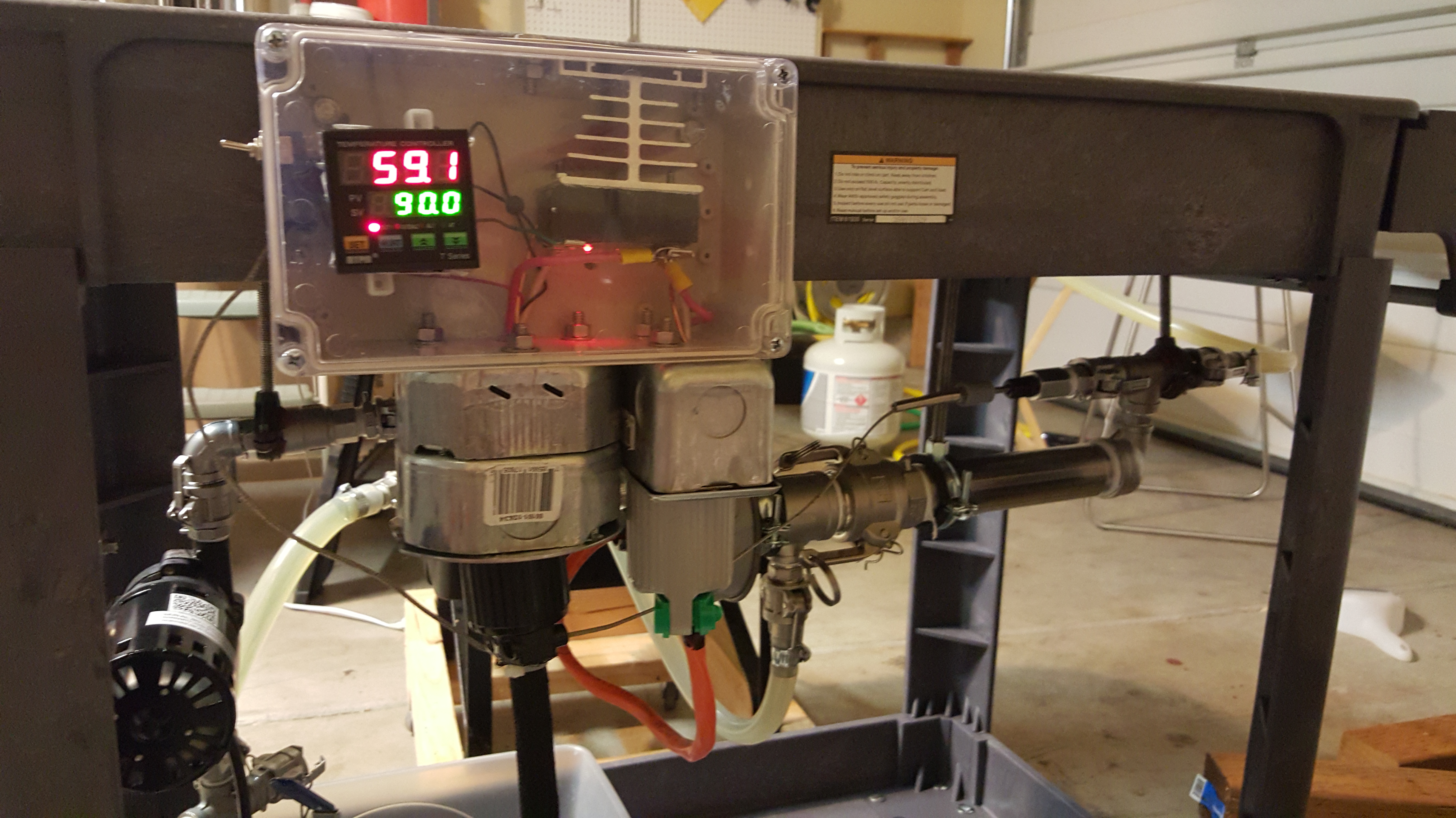 Actually contained within the enclosure are a switch (on the left), an AGPtek PID controller, and an SSR with heat sink. The PID controller will eventually be substituted for a custom board, but that’s a project for the future.

The SSR was also a frustration. I initially bought a Fotek SSR-40A, but it failed on its first cycle, giving up its magic smoke immediately. My expectations of evidence are high, so I grabbed the fire extinguisher and tried it twice more. When it looked like Independence Day in the enclosure, I concluded confidently that it was broken. I ordered a higher quality Berme brand 40A SSR, and it passed the initial test with flying colors. 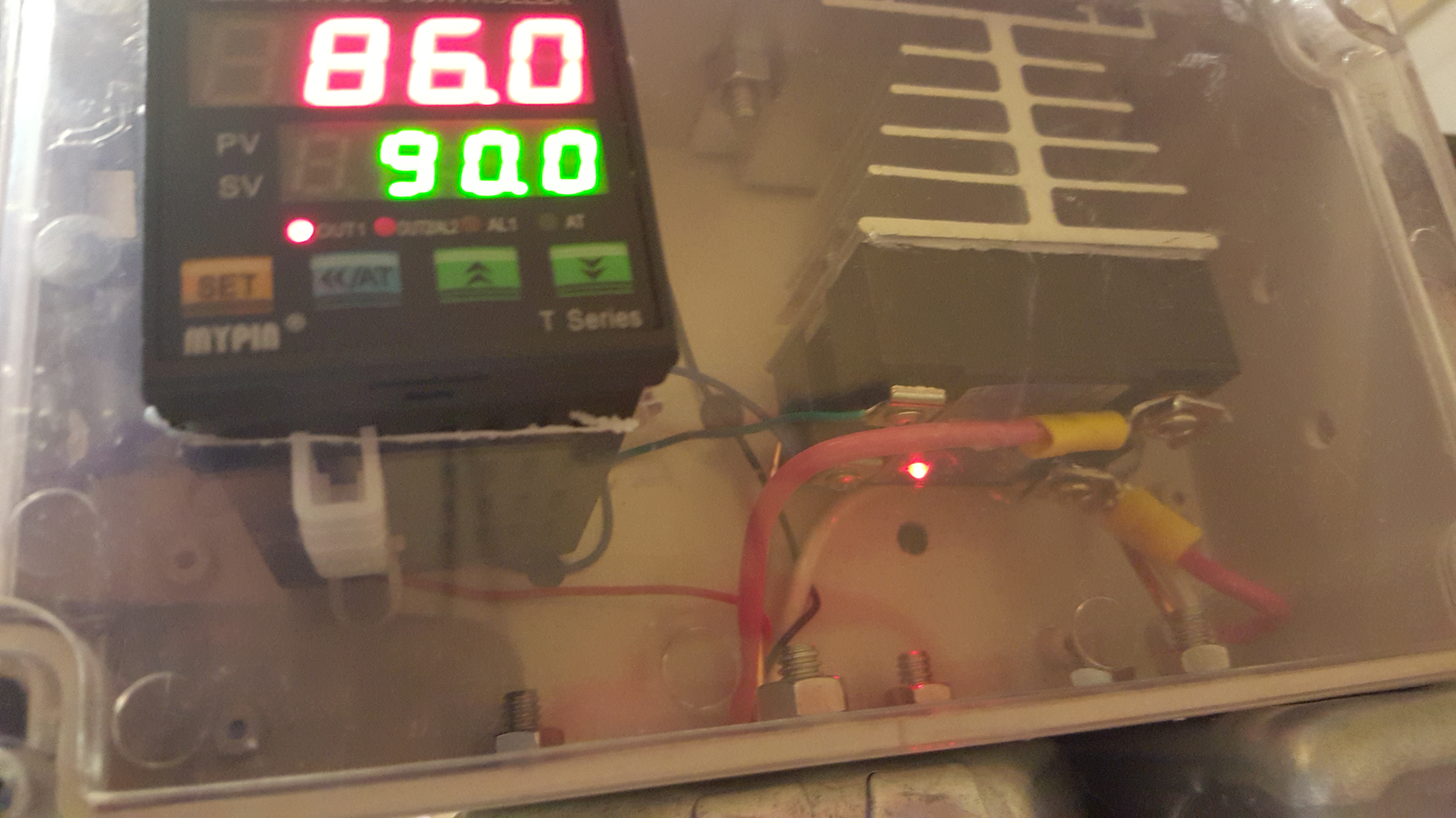 Wires and Circuits and Breakers, Oh My!

Lastly, I swapped out the 30 A dual pole circuit breaker for a similar breaker with a ground fault circuit interrupter. GFCI is a safety feature that breaks the circuit if there is a current outside the electrical circuit, for example, through your heart. These are the same devices on the plugs for blow dryers that have Test and Reset buttons, and they’re good to use in circuits that are near conductive fluids like wort. 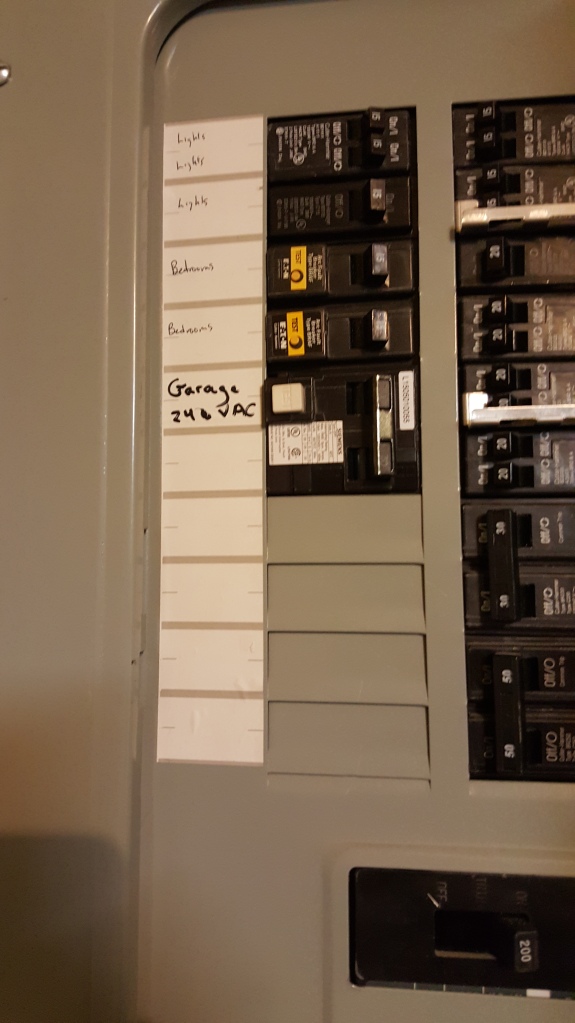 I’ll be brewing a Belgian-Style Stout this weekend with Alex and Connie. Fingers crossed!